Transverse Myelitis is a variant of Acute Flaccid Myelitis (AFM), the polio-like disease that's been creating a lot of concern among parents and doctors.

Nolan was a perfectly healthy little boy when he suddenly got sick at the age of 2. His parents said the virus came out of nowhere and has paralyzed their son for the last three years.

His mom, Jen Nachreiner, said out of nowhere one morning, he didn’t want to use his hands or his legs.

“He couldn’t articulate if he was experiencing pain or discomfort, so we put him in the car and took him to a birthday party. We lifted him out of his car seat and he was a limp noodle,” Nachreiner said.

Nachreiner and her husband Eric rushed Nolan to Children's Hospital and watched their son become paralyzed from the neck down.

“I don’t know if I’ve processed it to this day because it’s something that you can never fully wrap your head around that something like this can happen,” Nachreiner said 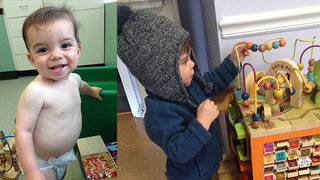 Nolan before his diagnosis.

The last three years have been filled with doctors and therapy.

Like the current AFM cases at Children’s Hospital in Pittsburgh, doctors don’t know why Nolan’s body responded this way to an otherwise harmless virus.

But he has made some huge improvements recently...moving his wrists, fingers and legs.

Jen and Eric said parents must be strong and relentless advocates for their children.

“If you’re being told that your progress has to fall in a certain timeline, or has to happen within six months or one year or two years, that you don’t have to listen to that because there is no timeline for what this recovery is going to look like for your child,” Nachreiner said.