HAMILTON, Ohio — An Ohio man who massacred 11 of his family members — including his brother’s eight children — on Easter Day 1975 has died in prison.

James Urban Ruppert, 88, was serving two life sentences when he died last week. According to The Associated Press, prison officials said Ruppert appeared to have died of natural causes.

His official cause of death was pending.

Ruppert, then 40, was convicted of the March 30, 1975, murders of his widowed mother, Charity “Billie” Ruppert, 65, and his brother, Leonard Ruppert Jr., 42. He also killed his sister-in-law, Alma Ruppert, 38, and Leonard and Alma Ruppert’s eight children.

The children ranged in age from 4 to 17, according to news accounts. 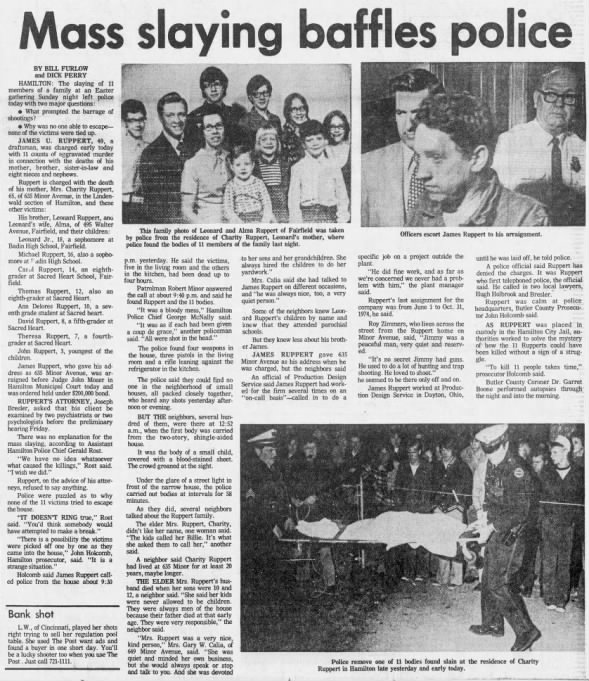 ‘There’s been a shooting’

A 1975 New York Times article stated that Ruppert called police on Easter Sunday to report the shooting at his mother’s house on Minor Avenue in Hamilton. He stood inside the door awaiting the officers who responded to the two-story home.

What they found inside was a bloodbath. Ruppert’s mother, brother, sister-in-law and three of the children were found dead in the kitchen.

Five of the children were slain in the living room, the Times reported. Ten of the victims had been shot multiple times, including shots to the head.

All the victims had been dead for hours when officers arrived.

“It was a bloody mess,” then-Hamilton police Chief George McNally told the Cincinnati Post in 1975. “It was as if each had been given a coup de grace. All were shot in the head.”

Police initially struggled to comprehend the murders. Ruppert was described by neighbors as a “very quiet person” who they knew little about.

Ruppert was 10 and his brother was 12 when their father, Leonard Ruppert Sr., died.

“She said her kids were never allowed to be children,” one neighbor told the Post of Charity Ruppert. “They were always men of the house because their father died at that early age. They were very responsible.”

For James Ruppert, that responsibility did not appear to carry over into adulthood. An unemployed draftsman, Ruppert had never married and he still lived with his mother.

Leonard Ruppert, meanwhile, was a successful electrical engineer. He was also much more successful on the romance front — with his brother’s ex-girlfriend.

According to contemporary news reports, Alma Ruppert had dated James before marrying his brother and starting their family.

Witnesses later told police that in the days before the murders, James Ruppert was angry at his mother. Charity Ruppert had grown tired of her younger son living with her while he spent what little money he had on drinking.

That night, he went to his regular bar, the 19th Hole, where he told a bartender acquaintance that his mother was planning to evict him. Charity Ruppert had reportedly told her son, “If he could drink seven days a week, he could help pay the rent.”

James Ruppert left the bar around 11 p.m. but later returned. The bartender asked if he’d solved the problems he was having with his mother.

“Not yet,” Ruppert replied, according to the newspaper.

On Easter Sunday, Ruppert awoke from a hangover to the sounds of his brother’s children arriving at their grandmother’s home and enjoying an Easter egg hunt in the front yard. When he went downstairs to say hello, Leonard Ruppert asked his brother an innocuous question.

“How’s that Volkswagen?” he said, according to the Daily News.

Believing his brother was insulting him, James Ruppert went back upstairs. The AP reported that when he returned, he was armed with three pistols and a rifle.

Leonard Ruppert Jr. was the first to die. According to a 1981 report in the Post, he had been shot seven times.

James Ruppert killed his sister-in-law and his mother, who lunged at him in a failed attempt to stop him. Charity Ruppert had been cooking for her grandchildren when the gunshots rang out.

Ruppert then turned his guns on the children: Ann, 12; David, 11; and Theresa, who was 9. Police found them lying near their parents, blood-spattered Easter candy littering the floor around their bodies.

Walking into the living room, Ruppert was confronted by his oldest nephew, 17-year-old Leonard III. Like his father, the teen was shot seven times.

The Daily News reported that Ruppert then sat on the couch and shot the remaining children: Michael, 16; Tommy, 14; Carol, 13; and John, 4.

John, the youngest of the victims, was found laying against the couch, his hands still pressed to his ears to block the sound of the gunshots, the Post reported.

Authorities said Ruppert shot each victim at least once to keep them from running away. He then methodically approached each and shot them again to ensure they were dead.

At trial, a psychiatrist testified that Ruppert then lay down on a couch at the home for several hours, contemplating suicide, before calling police. The AP reported that he determined that suicide would be a mortal sin.

Ruppert told the doctor he didn’t want that to be the last thing he did, so he summoned authorities.

Court records indicate that Ruppert was initially found guilty in July 1975 of 11 counts of aggravated murder and was sentenced to 11 consecutive life sentences. That verdict was later thrown out because Ruppert had mistakenly been told it would take a unanimous verdict of a three-judge panel to convict him.

His guilty verdict had been reached by a majority vote.

James Ruppert was convicted again in 1982 of murdering his mother and brother. He was found not guilty by reason of insanity in the killing of Alma Ruppert and the children. 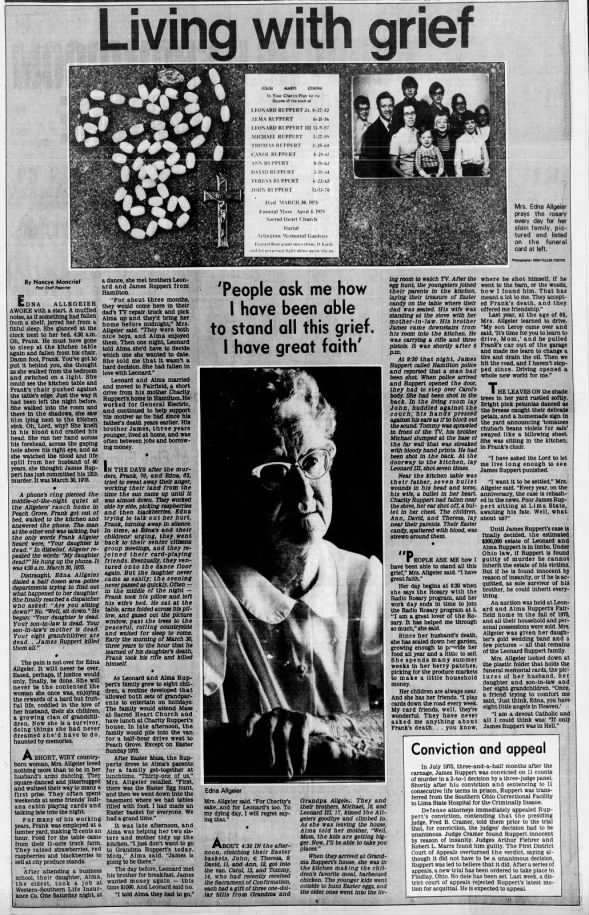 By the time of his second conviction, the grief of losing an entire family had taken a toll on the few relatives left behind. The Ruppert children’s maternal grandmother, Edna Allgeiers, was widowed three years to the day after the brutal murders.

At 4:30 a.m. on March 30, 1978 — the same minute the couple had learned their daughter and grandchildren were gone — Frank Allgeiers put a gun to his head and pulled the trigger. His wife, startled awake by the gunshot, found him on their kitchen floor.

Edna Allgeiers sat down for a lengthy interview with the Post in July 1981, as she awaited justice for her family. She said her Catholic faith helped her through each painful day.

“Once, a friend trying to comfort me said, ‘Just think, Edna, you have eight little angels in Heaven,’” Allgeiers told the newspaper. “I am a devout Catholic, and all I could think was, ‘If only James Ruppert was in Hell.’”

8 bricks of suspected cocaine wash up on Mississippi beach