TEAM USA: Who is Chloe Kim?

Chloe Kim, 17, has yet to compete in any Olympic Games, but has become one of snowboarding's most renowned names. She will be competing in halfpipe.

Kim qualified mathematically for the U.S. Olympic team in Sochi, but at age 13, was not old enough to compete.

Kim could become the youngest female snowboarding medalist at the age of 17, but she could be beaten to the record by Hailey Langland, since the slopestyle competition falls one day before halfpipe.

Kim was born April 23, 2000, in Long Beach, California. She was on a snowboard by the age of 4, but was not thrilled with the sport at first. Kim grew up taking trips to Mammoth with her father, who would drive six hours each way on the weekends. He would form a makeshift bed for Kim in the back seat of their SUV.

At the age of 6, Kim entered her first competition and won junior nationals the following year.

Kim is a first generation Korean-American. Her parents immigrated to the U.S. in 1998. Kim is fluent in Korean and her mother's side of the family lives in Seoul. 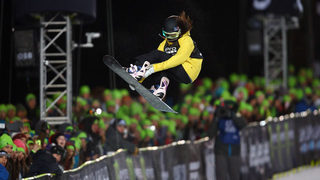 What a deal: Georgia gas station sells gas at $1.99 per gallon

4 black bears killed in Alaska campground set aside for homeless