BENTON, Ky. — A shooting at a Kentucky high school earlier in the week took the lives of two students, but not before one of them made contact with her mother.

One of the victims was identified as 15-year-old Bailey Holt, who was attending classes at Marshall County High School when the shooting began. WKRN reported that her mother, Secret Holt, heard news of the shooting and tried calling her, but Bailey didn't pick up her phone.

"We tried and tried to call her and she didn't answer," Secret told WKRN. "It's not like her not to answer or text back."

Some time passed before Bailey called her mother back.

"She called me and all I could hear was voices. Chaos in the background," Secret said. "She couldn't say anything, and I tried to call her name over and over and over, and she never responded. We rushed to the high school, and they wouldn't let us get through."

What Secret and Bailey's father, Jasen Holt, didn't know at the time was that their daughter had already been shot. She was later pronounced dead at the scene.

The parents did not know they had lost their daughter until they went to the high school. Bailey never stepped off the school buses used to transport the evacuated students to a nearby high school.

“We waited and waited for her to get off the buses, and she never did,” Secret said. “The principal at North Marshall came and got me and took us outside and we got in a cop car, and they took us to the fire department and told us what had happened.” 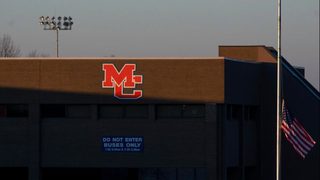 Secret had strong feelings for the gunman who took her daughter’s life.

“I don’t know if I can go to court and see him,” she said through tears.

She wished justice for her daughter, but still held on to compassion.

"I just don't know if I can, but I want him to pay for everything he's done. I also want to pray for him, too, because I know he's probably having a hard time, too, but he took our baby. He still took my baby from me," she said.

Secret and Jasen remember their daughter as a young woman whose smile "would light up any room." They remember her kindness and her many friendships.

Though she was young, Bailey already knew how she wished to serve others.

"Even though she was 15, she had already decided her career was going to be a labor and delivery nurse," Secret said.

She added that her daughter was "just so kindhearted and the most amazing kid anybody could ever ask for."

Those in the area can donate to a fund created for the parents at CFSB Bank: the Bailey Holt Memorial Fund, C/O Shanna Wood.

The other victim was identified as Preston Ryan Cope, 15. Preston was transported to Vanderbilt Medical Center for his injuries, where he was later pronounced dead.

Kentucky State Police reported that 18 others were wounded in the attack, most of them from gunshots. At least five students were said to be in critical condition.

The suspected gunman, a 15-year-old male student, has been charged as an adult with two counts of murder and 12 counts of first-degree assault. Officials initially planned to charge him with attempted murder, but determined they would have more success with assault charges. The penalties for both are the same in Kentucky.

"I beg of you again to respect the fact that these children belong to this community and to specific families in this community, and this is a wound that is going to take a long time to heal," Kentucky Gov. Matt Bevin said in a press conference, asking others to give the community space to mourn.