PHILADELPHIA — When a 15-year-old Joe Ligon last saw daylight as a free man, Dwight Eisenhower had just wrapped up his first month as president.

Ligon, now 83 years old, walked out of Pennsylvania’s State Correctional Institution Phoenix on Thursday after serving nearly 68 years in prison. Ligon, of Philadelphia, is the longest-serving juvenile “lifer” in the United States.

As he looked out upon the city from his lawyer’s eighth-floor office that day, he spoke to a reporter.

“I’m looking at all the tall buildings,” Ligon told the Philadelphia Inquirer writer. “This is all new to me. This never existed.”

Raised on a farm in Alabama, Ligon had little in the way of formal education, either before or after his family moved north to Philadelphia when he was 13, the newspaper reported. Enrolled as a student in his new city, he couldn’t keep up with his classmates and remained illiterate two years later when he joined a group of teens on a night that would forever change all their lives.

Ligon was among five teenagers arrested for first-degree murder, assault and other related charges for a string of Feb. 20, 1953, knife attacks that killed two men and injured another six. Philadelphia police officials said at the time that the boys, all ages 14 to 16, were affiliated with a recently formed gang known as the “Head Hunters.”

The teens, who were armed with switchblades, bought a couple of bottles of wine and, after getting drunk, went on a two-hour “reign of terror” that left Charles Pitts, 60, and 65-year-old Jackson Hamm dead, the Inquirer reported a few days later.

Two of the boys went to trial but the other four, Ligon included, pleaded guilty that June. The week before Christmas, he was sentenced to two mandatory terms of life in prison without parole.

Ligon, whose co-defendants named him as the person who stabbed all eight victims, has admitted to taking part in the attacks that fateful night but told the Inquirer he did not kill anyone.

Federal court records indicate that 1953 trial transcripts reflect Ligon’s consistent claim that while he did stab one victim, the person he stabbed survived the assault.

The teen went to prison, where he eventually learned to read and write, the newspaper reported. He learned to box and kept up with current events on a small television he kept in his cell.

Read a portion of the initial story about the teens’ arrests below. 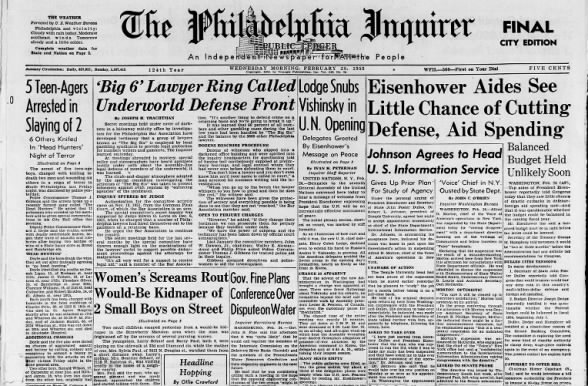 Ligon expected to live his entire adult life behind bars, but in 2012, the U.S. Supreme Court ruled in a case out of his native Alabama that mandatory life imprisonment for juveniles was unconstitutional. Still, the Inquirer reported, Pennsylvania courts refused at that time to apply the ruling to those inmates already in prison.

In 2016, a second court ruling forced the state’s hand, meaning that Ligon and more than 500 other inmates convicted as juveniles had to be resentenced. The following year, a judge sentenced him to 35 years to life.

He balked at the thought, however, and despite encouragement from his lawyer, his fellow inmates and the judge presiding over his case, he refused to apply.

“I like to be free,” Ligon told the newspaper. “With parole, you got to see the parole people every so often. You can’t leave the city without permission from parole. That’s part of freedom for me.”

Instead, Ligon and Bradley Bridge, Ligon’s attorney since 2006, appealed his new sentence, which would have required that he remain on parole for the rest of his life if and when he was released. In 2017, he told the Inquirer he did not want to be forced to remain in Pennsylvania.

He said he hoped to move to New Jersey, where his sister and niece live. Upon his release Thursday, however, Ligon had been set up to stay with a family in Philadelphia who takes in newly-released inmates, the Inquirer reported.

Bridge argued in the appeal that the maximum penalty contained within Ligon’s new sentence remained unconstitutional, despite the minimum of 35 years. A sentence must be individualized for each defendant, and it must be individualized in its entirety, “not treated as a means to indefinite parole, or worse, as a means of private retribution or judicial policy-making,” he wrote.

“It is unconstitutional because the constitution requires that the entire sentence, both the minimum and maximum terms imposed on a juvenile, be individualized — and a one-size-fits-all cannot pass constitutional muster,” Bridge argued.

The Philadelphia District Attorney’s Office supported Ligon’s writ of habeas corpus. On Nov. 13, U.S. District Judge Anita B. Brody granted Ligon’s petition and remanded the case to the lower court, ordering that the inmate be resentenced within 90 days or released from all custody, including parole.

The 90-day deadline passed on Thursday.

Bridge told the Inquirer that he’s already heard from several other former inmates who, like Ligon, wish to challenge their lifetime parole sentences.

“We waste people’s lives by over-incarcerating and we waste money by over-incarcerating. His case graphically demonstrates the absurdity of wasting each,” Bridge told the newspaper Thursday. “Hopefully his release, and the release of the juvenile lifers in general, will cause a reevaluation of the way we incarcerate people.”