TAMPA, Fla. — A Florida sheriff is taking advantage of the enormous popularity of Netflix’s “Tiger King: Murder, Mayhem and Madness” to try to answer one of the most enduring questions raised by the limited series: What happened to Jack Donald “Don” Lewis?

“Since @netflix and #Covid19 #Quarantine has made #TigerKing all the rage, I figured it was a good time to ask for new leads,” Hillsborough County Sheriff Chad Chronister tweeted Monday.

“Only YOU can help solve the Jack ‘Don’ Lewis cold case,” announced a flyer released with the tweet.

“We are already receiving new tips and we hope to close this cold case soon with the help of the public,” Chronister said. “Since the documentary came out we’ve been receiving about six tips a day related to this case. We are looking into each one thoroughly.”

Lewis was the second husband of Carole Baskin, the Tampa, Florida, animal activist and owner of Big Cat Rescue whom the titular “Tiger King,” Joseph Maldonado-Passage, aka “Joe Exotic,” was convicted last year of plotting to kill.

The pair clashed for years over Baskin’s attempts to have Maldonado-Passage’s Wynnewood, Arkansas, wildlife park shut down.

The third episode in the seven-episode Netflix series, titled “The Secret,” focuses on Baskin’s past, including Lewis’ 1997 disappearance. Maldonado-Passage repeatedly claimed, both in the series and over the years that Baskin killed her husband.

Baskin has adamantly denied any involvement in Lewis’ disappearance or death.

Lewis, 59, vanished Aug. 18, 1997, after leaving home early to deliver some signs to his lawyer’s office, according to authorities. He was never seen alive again.

“The next day, his white 1989 Dodge van was found abandoned at the Pilot Country Airport, a private airport near State Road 52 and U.S. 41 in Pasco County, Florida,” according to the Charley Project, an organization that profiles missing persons cases. “The keys were on the floorboard and there was no sign of Jack. He knows how to fly a plane and he owned several, but he'd been involved in three aviation accidents and his pilot's license was suspended at the time of his disappearance.”

Lewis’ oldest child, Donna Pettis, told People magazine in 1998 that the family believes Baskin was involved in her father’s disappearance. She, like Maldonado-Passage, suggested a novel way of getting rid of his body.

Baskin feeding Lewis’ body to their big cats would be “a perfect scenario to dispose of someone,” Pettis told the magazine. “We were upset that the cops didn’t test the DNA on the meat grinder.”

The meat grinder Baskin and Lewis used to feed their cats was brought up in “Tiger King.” To illustrate the theory, filmmakers showed meat being put through what appeared to be an industrial grinder.

“This is the most ludicrous of all the lies,” Baskin wrote on BigCatRescue.org, where she has refuted the claims in the Netflix series. “The meat grinder shown in the video was enormous. Our meat grinder was one of those little tabletop, hand crank things like you’d have in your kitchen at home.

“Meat had to first be cut into one-inch cubes … to go through it. The idea that a human body and skeleton could be put through it is idiotic.”

While refuting the claims during filming, Baskin gave a theory of her own regarding how someone could be fed to a big cat.

Some of Baskin’s critics consider her comments about sardine oil tantamount to a confession. Her statements, along with general speculation on her potential involvement in Lewis’ disappearance, have resulted in memes targeting her.

Carole Baskin: "I didn't feed my husband to the tigers"

When your man acting up so you gotta subtly remind him that he could easily become your “first” husband. #CaroleBaskin #TigerKing pic.twitter.com/q4a883GkBt

Maldonado-Passage at one point created a music video for a song called “Here, Kitty Kitty,” in which he is dressed as a priest and a Baskin lookalike feeds raw meat to several tigers off a platter that also holds a fake head. Watch the “Here, Kitty Kitty” music video at the end of this story.

Baskin’s current husband, Howard Baskin, has joined her in refuting the claims made in the documentary and the nefarious allegations against her regarding Lewis’ disappearance. He addressed the rumors in a YouTube video uploaded Saturday.

“Anyone who spends an hour with Carole would come away knowing that there was no way she had any involvement in Don’s disappearance,” Howard Baskin said.

According to a September 1997 article in the Tampa Bay Times, there were unconfirmed reports that Lewis may have been in Costa Rica, where he owned 200 acres of land on which he someday hoped to move his and his wife’s wildlife sanctuary, at that time known as Wildlife on Easy Street.

Baskin has said that Lewis told her he was traveling to Costa Rica that day to unload several of his vehicles.

Lewis and Baskin, whose name at the time was Carole Stairs, met in 1981, according to the Netflix documentary. Both Lewis, then 42, and Baskin, 20, were married to other people.

Baskin said she and Lewis met when he picked her up as she walked on a sidewalk, crying, following an argument with her first husband. She initially declined his offer of a ride. 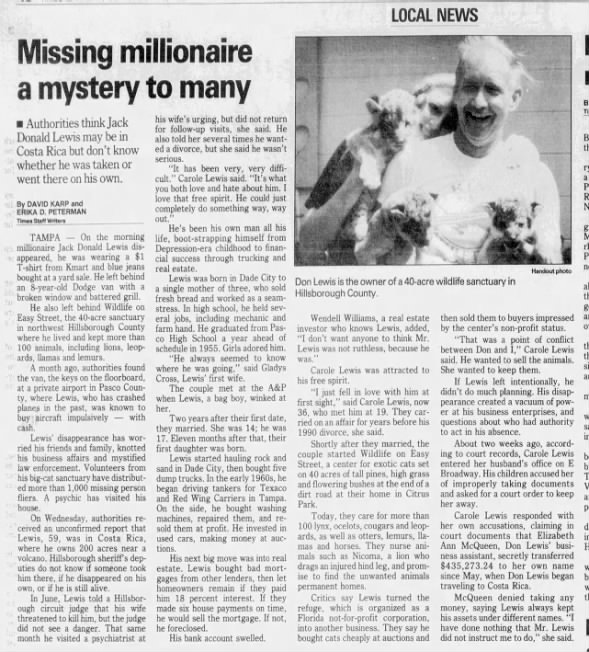 “I think it was on the third time that he pulled around, and he had a gun sitting on the front seat of his car,” Baskin said in “Tiger King.” “And he said, ‘You can hold this gun on me, I just need somebody to talk to.’”

“So, I picked up the gun, held it on him and we drove around and talked,” Baskin said, laughing.

The couple began an affair that lasted for about 10 years until Lewis divorced his wife, Gladys Lewis Cross.

Cross and two of her daughters with Lewis spoke out in the documentary against Baskin, who they believe is responsible for his death.

“I said, ‘Well, she’s an angel sent straight from hell, and one day, you’ll find out,” Cross said.

After Lewis and Baskin married, they opened Wildlife on Easy Street, which grew to become home to about 200 animals, including about 120 wild cats. Lewis was also big into real estate and, according to Baskin, had begun hoarding vehicles on their property.

In the documentary and in her lengthy statement on BigCatRescue.org, Baskin alleges that Lewis had begun showing signs of possible dementia.

“He deteriorated into dumpster diving and even got stuck in a dumpster and called me crying because he did not know where he was,” Baskin wrote. “Back then Alzheimer’s was not a commonly used word. I had not heard of it. Someone mentioned Alzheimer’s to me and I got Don to agree to set up an appointment with a specialist, Dr. Gold.”

Baskin also claimed Lewis was diagnosed by a psychiatrist as having bipolar disorder and was given a prescription to have an MRI conducted.

“I did not find the prescription until I was searching his bedside table looking for clues to his disappearance,” she wrote.

“He started refusing to use the bathroom and defecating outside,” she wrote. “He brought in a homeless man to stay in our house. I rescheduled an appointment for him to see the specialist, Dr. Gold, but he disappeared before the appointment date.”

The documentary and Lewis’ Charley Project profile discuss marital problems between Lewis and Baskin. There was talk of divorce and, in June 1997, two months before he vanished, Lewis sought a restraining order against his wife.

“This is the second time Carole has got angry enouf (sic) to threaten to kill me,” Lewis wrote.

Lewis wrote that while he was away, Baskin had allowed junk men to remove some of the vehicles and equipment he had on the property.

Lewis wrote that Baskin owned a revolver and had taken his .357 and hidden it from him.

He wrote that he had no alternate housing because of the 132 exotic cats he had to feed and care for on the property, which he said he owned before their marriage.

A judge denied his restraining order.

Since @netflix and #Covid19 #Quarantine has made #TigerKing all the rage, I figured it was a good time to ask for new leads. #CaroleBaskin #DonLewis #Netflix #Tiger #BigCatRescue #JoeExotic #TigerKingNetflix #HCSO pic.twitter.com/LHoJcBZVOI

Baskin acknowledged both in the documentary and in media coverage of Lewis’ disappearance that there was contention in their marriage. According to the Times in 1997, critics of the couple’s refuge pointed out that, while it was classified as a nonprofit, Lewis turned it into a business by buying big cats at auction and selling them for a profit.

Baskin told the newspaper she wanted to keep the cats and give them a home.

“That was a point of conflict between Don and I,” she said.

After Lewis vanished, his children and Baskin fought over control of his business and property, the Charley Project said. A durable power of attorney document Lewis signed in 1996 gave Baskin control over his businesses and property.

“Carole refused to cooperate with the police investigation into his disappearance or take a polygraph, saying her attorney had advised against it,” the page on Lewis’ disappearance said. “All the other members of the family volunteered to take polygraphs.”

Lewis was declared dead in August 2002, five years after he vanished. If he were alive today, he would be 81 years old.

Anyone with information about his disappearance is asked to call the Hillsborough County Sheriff’s Office at 813-247-8200.