Government shutdown: President Trump says it will last 'until we have a wall'

WASHINGTON — A partial government shutdown continues as a stalemate with President Donald Trump and congressional leaders continued over his demand for $5 billion to build a wall on the U.S.-Mexico border.

Without a deal, funding for about 25 percent of the government expired.

Update: 3:35 p.m. EST Dec. 25: President Trump spoke to members of the five branches of the U.S. military via video conference Tuesday, sending them his well-wishes before discussing the partial government shutdown and the country's need for a wall:

“I can tell you it's not going to be open until we have a wall, a fence, whatever they would like to call it."

Update 3:50 p.m. EST Dec. 23: Incoming chief of staff Mick Mulvaney said on "Fox News Sunday" that the shutdown could continue into the next year.

“It is very possible that the shutdown will go beyond the 28th and into the new Congress,” Mulvaney said.

Update 3:55 p.m. EST Dec. 22: The Senate does not estimate a vote on a deal to end the partial government shutdown until next Thursday at the earliest, tweeted Jamie Dupree, Cox Media Group Washington correspondent.

Senate schedule doesn't envision a vote on a deal to end the partial shutdown before next Thursday at the earliest https://t.co/ZBd3HG5280

President Trump has been active on Twitter today, saying he’s in the White House today “working hard,” and reaffirming his support for tough border security.

Update 3:00 p.m. EST Dec. 22: White House officials are warning that the government shutdown will last through the holidays, as Trump is not relenting on his demand, tweeted New York Times White House correspondent Katie Rogers. "We have continued to put forth what we think is an important expectation ... which is $5 billion in border security," a senior White House official told reporters, according to Rogers' tweet.

Update 12:30 p.m. EST Dec. 22: Senate Majority Leader Mitch McConnell gave an update on government funding negotiations. He said a procedural agreement was made to "create space" to allow discussions between Senate Democrats and White House. There will be no votes until Trump and Senate Democrats reach an agreement.

Update 9:06 a.m. EST Dec. 22: The Senate is expected to meet today at noon to see if they can hammer out an agreement that President Trump will sign. If any new deal is announced, lawmakers would be given 24 hours notice to return to Washington for a vote.

"President Trump has said more than 25 times that he wanted a shutdown and now he has gotten what he wanted," Schumer and Pelosi said in the statement. “Democrats have offered Republicans multiple proposals to keep the government open, including one that already passed the Senate unanimously, and all of which include funding for strong, sensible, and effective border security -- not the president’s ineffective and expensive wall.

“If President Trump and Republicans choose to continue this Trump Shutdown, the new House Democratic majority will swiftly pass legislation to re-open government in January.”

MULVANEY has sent the MEMO:

"Although we are hopeful that this lapse in appropriations will be of short duration, employees should report to work for their next regularly scheduled tour of duty to undertake orderly shutdown activities."https://t.co/TcoLHiob9u

MULVANEY has sent the MEMO:

"Although we are hopeful that this lapse in appropriations will be of short duration, employees should report to work for their next regularly scheduled tour of duty to undertake orderly shutdown activities."https://t.co/TcoLHiob9u

Mulvaney says in a memo for government executives that "we are hopeful that this lapse in appropriations will be of short duration" but that employees should report to work when scheduled to "undertake orderly shutdown activities."

Senators expect to return at noon Saturday as talks continue.

Update 7:09 p.m. EST Dec. 21: The House adjourned Friday evening and will return Saturday at noon which will likely trigger a partial shutdown.

Update 5:55 p.m. EST Dec. 21: With just over 6 hours left until the midnight deadline, Vice President Pence's tie-breaking vote advanced the 47-47 tally after a marathon, five-hour voting session in the Senate that dragged on as senators rushed back to Washington.

The move doesn’t immediately end the threat of a partial federal shutdown, but it kick-starts negotiations as Congress tries to find a resolution to Trump’s demand for the wall.

Senators say they won’t vote on a final bill to fund the government until Trump and congressional leaders all agree to a deal.

Flake: "There is no path forward for the House bill"

"It's possible that we'll have a shutdown," the president said. "I think the chances are probably very good because I don't think Democrats care so much about maybe this issue, but this is a very big issue"

President Trump on the looming government shutdown: “It’s possible that we’ll have a shutdown. I would say the chances are probably very good…”

The Republican-led House approved funding Thursday for Trump's border wall and sent the bill to the Senate.

Senators are holding a procedural vote Thursday afternoon to determine whether to move forward with the bill.

The Senate vote to proceed to the House CR+bill has now been going for 2 hours. 43 Yes - 45 No pic.twitter.com/UUCwMqzIFa

During a meeting with House Democratic Leader Nancy Pelosi and Senate Democratic Leader Charles Schumer last week, Trump said he'd shut down the government if lawmakers failed to secure $5 billion in funding for a wall to span the U.S.-Mexico border.

President Trump will meet with Senate Republicans this morning at 10:30am to discuss the Funding Bill and the importance of Border Security.

The president insisted on Twitter Friday morning that, "The Democrats now own the shutdown!"

The Democrats now own the shutdown!

Original report: A potential government shutdown looms and President Donald Trump is tweeting, saying that if a spending plan isn't passed and signed by midnight, it will be the Democrats fault when the government closes.

Shutdown today if Democrats do not vote for Border Security!

On Thursday night, after a meeting between House Republicans and the president, the House passed a spending bill that included $5 billion for Trump's border wall.

Democrats, it is time to come together and put the SAFETY of the AMERICAN PEOPLE before POLITICS. Border security must become a #1 priority! pic.twitter.com/Wck6UpQGil

The bill is in the hands of the Senate whose members have to act on it before the midnight deadline or the government closes.

Washington watchers believe the bill will not pass because of the money earmarked for the wall, CNN reported.

Democrats have said they will not support the money for the border and both sides of the Senate aisle are needed if the spending plan is to pass.

>> Government shutdown: What will close; will you get your Social Security check, SNAP, WIC?

In a series of morning tweets by the President, he placed the blame on Democrats if the government shuts down.

Senator Mitch McConnell should fight for the Wall and Border Security as hard as he fought for anything. He will need Democrat votes, but as shown in the House, good things happen. If enough Dems don’t vote, it will be a Democrat Shutdown! House Republicans were great yesterday!

The Democrats are trying to belittle the concept of a Wall, calling it old fashioned. The fact is there is nothing else’s that will work, and that has been true for thousands of years. It’s like the wheel, there is nothing better. I know tech better than anyone, & technology.....

.....on a Border is only effective in conjunction with a Wall. Properly designed and built Walls work, and the Democrats are lying when they say they don’t. In Israel the Wall is 99.9% successful. Will not be any different on our Southern Border! Hundreds of $Billions saved!

No matter what happens today in the Senate, Republican House Members should be very proud of themselves. They flew back to Washington from all parts of the World in order to vote for Border Security and the Wall. Not one Democrat voted yes, and we won big. I am very proud of you!

The Democrats, whose votes we need in the Senate, will probably vote against Border Security and the Wall even though they know it is DESPERATELY NEEDED. If the Dems vote no, there will be a shutdown that will last for a very long time. People don’t want Open Borders and Crime!

The president said he would not sign the Senate-backed spending bill that does not include money for the border wall. The Senate plan would grant funding to keep the government operating until Feb. 8, The Washington Post reported. 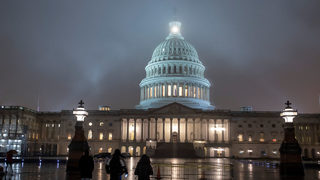 Officials: Third child hospitalized after being found unconscious in Massachusetts house has died