Who is John Chapman: Man who told police he left local woman to die in Vegas desert

Man tells police he drove Bethel Park woman to Las Vegas desert, suffocated her and left her to die John Chapman is behind bars facing multiple charges, including kidnapping, in connection with the disappearance of a Bethel Park woman who hasn't been seen since Sept. 15. And on Friday, he allegedly confessed to murdering her in Las Vegas. https://bit.ly/33TJQhg Subscribe to WPXI: https://on.wpxi.com/YouTube Connect with WPXI online: https://www.wpxi.com/ Download our FREE apps: https://wpxiapps.com/

BETHEL PARK, Pa. — John Chapman is behind bars facing multiple charges, including kidnapping, in connection with the disappearance of a Bethel Park woman who hasn't been seen since Sept. 15.

And on Friday, he allegedly confessed to murdering her in Las Vegas.

Police said Chapman, 39, confessed to driving Jaime Feden, 33, to Las Vegas sometime around Sept. 25, suffocating her and leaving her to die.

Chapman allegedly told police he convinced Feden to drive into the desert for a photo shoot. Police said he bound her hands and feet with zip ties and tied her to a signpost. Chapman also allegedly duct taped her mouth and nose, causing her to suffocate and die, according to police.

A criminal complaint says Chapman then removed the tape, the zip ties and Feden's clothing and left her near the signpost in Nevada before driving back to Bethel Park.

'I killed her because I had to'

Channel 11's Amy Hudak talked with Chapman's wife, who had no idea any of this was going on until he called her from the Bethel Park Police Department Friday morning.

"He said he had murdered a woman," said Maureen Chapman. "I was in disbelief."

Now, she's questioning their whole relationship and what she called his "double life," pretending to visit family and lying about his job.

"I killed her because I had to," John Chapman said, according to Maureen.

'He is a manipulator. He's a liar' 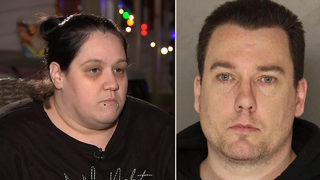 Kelly Murray was married to Chapman for seven years, and after hearing that he was connected to the disappearance of Feden, and allegedly, according to him, even her death -- she was sick to her stomach.

"The question should be – has he done this before?" Murray said.

Murray said they met on Myspace and wooed her a year later. They then tied the knot in Vegas.

"He tried saying he worked for the government, FBI, CIA and he was in the Navy," Murray said.

And even though Chapman was married, Murray said he dated other women.

And then, there was something that she found: "I found zip lock baggies with female underwear in them," Murray said. "They were individually bagged with names."

Before the two divorced, the Chapman's stayed in Pittsburgh with Feden, but Murray wasn't Chapman's wife -- she said she had to pretend to be his sister.

After Chapman's alleged murder confession, Murray is asking why?

Murray said not only could this have been her, Chapman also asked to take her younger sister to Vegas this spring. Her sister said she couldn't imagine what could have happened.